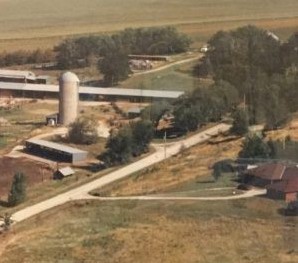 My daughter was born 4 years after we got married, I was employed “in town” for 4 years up until a couple of weeks before the due date. I was very lucky with this pregnancy because I didn’t have any sickness and was 2 MONTHS pregnant before I found out. Regular cycles had never been a thing of mine so that wasn’t even a sign. I craved fruit while pregnant and carried high so my 2 sisters-in-law kept teasing me it was a girl. We chose not to find out because we felt there were too few true surprises in life. Our family doctor, I also saw for OB, said pregnancy helps MS, but doctors aren’t sure of afterwards. I tried nursing her, but we didn’t work out doing that, which was fine because I didn’t know what was going to happen with my possible MS and me after the birth, so I didn’t want her to be dependent on me for food! Besides I wasn’t going back to work because we decided I would stay home with her and we would survive on 1 income.

My husband traded off on late night feedings, after I woke him up! He would even take her with him in the mornings to do chores when she was toddling around. (We only live about 1/8 mile away. We live across from the cattle lot on the south end and my in-laws live north, between the cattle lots and the shop where they work on equipment then the hog buildings are north of the shop.) This was funny for Dad because it was hog chores he did. That meant going into the pig nursery. The little pigs had space to run around, so Dad sat her in that area with the baby pigs and he fed the sows. Then he brought our daughter back down to the house and left her with Mom! The smell of a pig nursery stayed with you just walking in there. The smell transferred to anything you touched.

Cleaning a house everyday didn’t happen. (Why clean the house when it was easier to clean the object?) She got in a routine when she got home from the piggies that she stood with her eyes shut and her back to me with arms straight out and legs apart. She got Febreeze sprayed from head to toe. Then turned around for the same thing. I made sure not to spray it in her face. I even covered her face with my hand to spray her hair because the smell was EVERYWHERE! She had a different pair of shoes/boots that would stay outside or in the garage.

After that, I worked on the farm helping with hogs, moving or working on cattle, picking up hay, helping garden and canning in the summer all with my daughter until she got old enough to start school. If I was helping “the guys” (my husband, my brother-in-law, and my father-in-law) my daughter would stay with Grandma. Depending on what was going on at the farm that day, my mother-in-law and I would trade off cooking dinner (lunch). I didn’t know much about cooking when I got married, but I learned A LOT from my mother-in-law! We would look at a recipe when we sat down to take a break, I watched and listened and absorbed as much as I could and even learned what ingredient you could leave out of a recipe and what you could substitute 1 ingredient for another. I credit my mother-in-law for teaching me to cook!

My daughter started school, but I kept helping on the farm There was an occasional minor “flare-up” with MS. I mean once about every 2-3 years. I even got to take temporary jobs or part-time jobs to get back to an office setting and give me a break from the farm. I worked enough 1 year to pay for a trip to Disney World for the 3 of us, plane tickets, resort and dining plan! Vacations weren’t common with only 1 income, but me working paid for it, like bonus money.

I didn’t really know I was pregnant with the 2nd child either, but I learned much sooner. I was back working 1 day per week with a friend as my immediate supervisor. She had asked me how our Disney trip was. I told her it was good, but my boobs really hurt and still did. She said “You’re pregnant because my boobs hurt when I was pregnant.” I called the clinic the next day to get my blood checked. Over the phone the “vampire” lady  that I was friends with asked if I needed my thyroid checked. I said “No a pregnancy check”. She was smiling when I got there, took my blood, and called me a couple hours later and said I was right!! With this one I still didn’t get sick. I couldn’t eat pickles…and I LOVE pickles! But it was just longer to keep it a secret! We told our daughter in March. She was THRILLED, naturally wanting a sister.  Again we didn’t want to find out. Our son was born in the summer of 2006.

By the time my son was 3 or 4, I was walking with a cane because MS was starting to affect my balance. As time and my MS progressed, it was the cane in one hand and my husband’s hand, or my son’s or daughter’s in the other

As my MS progressed I made up my mind that I was going to keep walking as long as I could. Right or wrong I 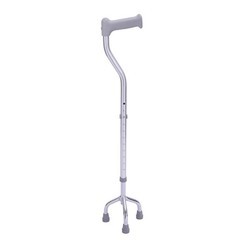 developed my own exercises.. I reverted back to my childhood/high school dancing days to keep my leg muscles moving, I did these exercises laying on the couch or bed. I would point and flex my feet with legs together starting at 75 times. Then I would point my foot and lift and lower 1 leg as high as I could starting at a 75-time repetition. Then switch legs and repeat. I would flex my foot on the 1st leg and do the same and switch legs again. You realize that by lifting and lowering you maintain control of the leg for both. The numbers of my lifts decreased over time, but I kept doing them because it kept working leg muscles. As my legs got stiffer I would bend and straighten each leg. Not saying that was the answer, but I am still walking after 23 years.

That picture is the kind of cane I used to help me with balance. Using a cane it limited me to staying in the house, cooking, canning, and doing farm books on the computer. I could also be out in front of the house stemming beans, podding peas, or scrubbing corn, carrots,  or beets to get ready to put up for canning or freezing, also. Then I could say I was cooking with MS and wanted to make it as simple as I could.

I took myself away from driving in the fall of 2017. Three stops, turned into 2 at the closest town when I couldn’t get my foot from gas to brake without lifting my leg with my hand. My foot would go under the brake pedal. I got home and left the van parked in the driveway and didn’t even pull in the garage! For a few years earlier my family told me I could only drive in the daytime and could go to the 2 little towns while I could drive. One town was 10 miles (under 3000 population) and the other was 20 miles away (same population). I was able to go get my shot, take forgotten items to school, go to the grocery store  or just run errands.

Since I couldn’t drive to the doctor’s office to get my B-12 shot, I just got the prescription to fill the shots at home. My husband said he would just give it to me. He knew how to do it well because of all the cattle and pig shots he has given in his life. I trusted him completely and wasn’t a bit nervous the first time he gave me one. I pulled up my sleeve and wiped my arm with alcohol while he filled the syringe. He asked me where about in my upper arm to be sure. I showed him then turned my head while he injected me. He hates needles and I can’t watch. He does a VERY GOOD job at giving me shots! I don’t even need a band-aid after!

Now that I can go back to work, I can’t drive! That’s why I’m trying to make it work on the internet. I DON’T take government disability when I’m still capable of working, just not driving to a job. Why don’t I take public transportation?  Let me just say, “I’m a hick from the sticks!” We live in a rural location with no public transportation. I want to work and help my husband and kids, so the work has to come to me!

I started using a walker when my son started preschool and my daughter was in 7th grade. I could still drive and it was a mini van because I could get out of the driver’s side and the door behind the driver would slide open. It was about convenience, not style. We bought a manual wheelchair from Ebay that gets used when we go places with a lot of walking. For example shopping malls, Walmart, Sam’s Club, chain hardware stores or even school programs I like the manual wheel chair because I get to work my arms when I wheel myself. The wheelchair stays in the van. I refuse to use it in the house! I will say I made it through our daughter’s high school graduation using a walker. My son’s high school graduation will probably be the wheelchair unless there becomes bone marrow stem cell procedures in this country in the next 4-5 years.

I would like to see bone marrow procedures become available in this country before too long. Since MS doctors from all over the world meet at least once a year, I would like to see them compare notes about procedures of this type approved in the U.S. If other countries are already doing it, why does it have to be in trial in the U. S. before they can approve it here? I have seen articles that this kind of bone marrow procedure could help with other types of diseases, like cancer. It is just a “re-boot” of your own stem cells. A week of radiation to clean your system, then a cleaning of the bad cells happens once taken before they put them back in you.I would like to think that by writing letters to your Senators and Representatives may help, but then I think I don’t want the medical profession to hurry, but moving quicker would be nice. 🙂 It’s only my opinion!

After all, 15 years ago I was not in a position with MS that I would have been willing to do something about it. But 15 years later, I see what’s in my future with MS and I would welcome a TREATMENT option, not an expensive drug option that didn’t work before with me! That’s strictly my opinion. I get around my ranch-style house with a walker. If I have problems with my hands, I will either squeeze a stress ball or use Silly Putty (if they make it anymore).